The tournament format was divided into 2 phases.  Phase 1 was a round robin format, teams placed into 2 groups, teams in each group playing each other once, and determining their place in the standings.  Phase 2 was a knockout format, top placed teams in Phase 1 squaring off against the lower place teams, winners eventually getting down to the final four.  The 2 semi-final matches were definitely 2 of the more well played, exciting and intense games of the tournament.  The first semi-final, Stamford Levy jumped out to an early 3-0 lead and seemed to be on their way to an easy victory.  But SITCH-Blue had other thoughts as they started to slowly claw their way back into the match….scoring once, then adding a second goal to give hope to the home town fans.  Then with time winding down, with literally seconds remaining, SITCH-Blue scored to tie the game and send the match into a 5 minute overtime.  The overtime was tense with each team getting great scoring chances to pull ahead.  Every shot and every close chance only intensified the tension between the players, the fans, and neutral spectators.  However, neither team was able to score against the other, forcing a penalty kick shootout to determine who will advance to the final.  The penalty kick shootout was also a close, back and forth affair; but Stamford prevailed with Oleh Senyk scoring the decisive pk. To win the match.

The second semi-final match was also a close, well played and exciting match.  The action went back and forth, both teams creating great scoring chances in attempts to create some positive momentum.  The goals were extremely hard to come by in this game as both teams truly displayed all out defensive efforts to block every dangerous shot attempt on goal.  With the score tied at 1-1, and time running down, the Brooklyn goalie saw a valid, but risky, opportunity to join the action as a fifth attacker towards the Ternopil goal.  The risk proved costly as the Ternopil team were able to counter attack quickly while the goalie was out of position, scoring the second, and eventual game winning goal for a 2-1 victory and putting them in the final against the Stamford Levy team.

Based on the 2 intense and hard fought semi final matches, it would not have been a surprise to see the level of play go down.  However, this was NOT the case as the final was just as exciting if not more so than the 2 semi final matches that just took place. Every time it looked like one team was going to score and take the momentum to pull ahead, the other team came fighting back to tie and/or take a lead in the match.  This truly was a game worth watching and fitting for a final.  With the score tied at 2-2, and time winding down on the clock, team leader Oleh Senyk blasted a shot from midfield that sailed passed the Ternopil keeper for the game winning goal and the championship trophy once again belonged to the Stamford Levy sport club.

After the game, teams gathered in the St. John Cultural Center social club for trophy and award presentations, along with refreshments and comraderie, discussing all the great games, goals and events that took place during the afternoon tournament.

Below are group standings after Phase 1 and Phase 2 Knockout stage results. 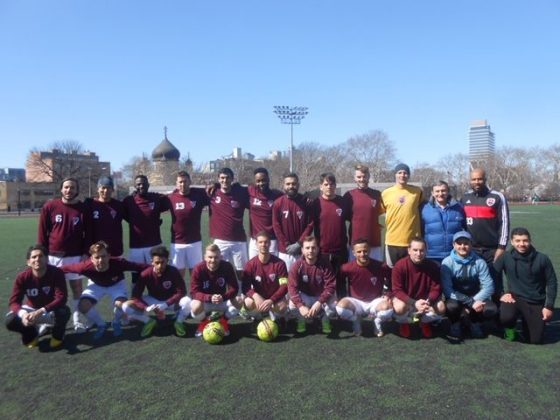